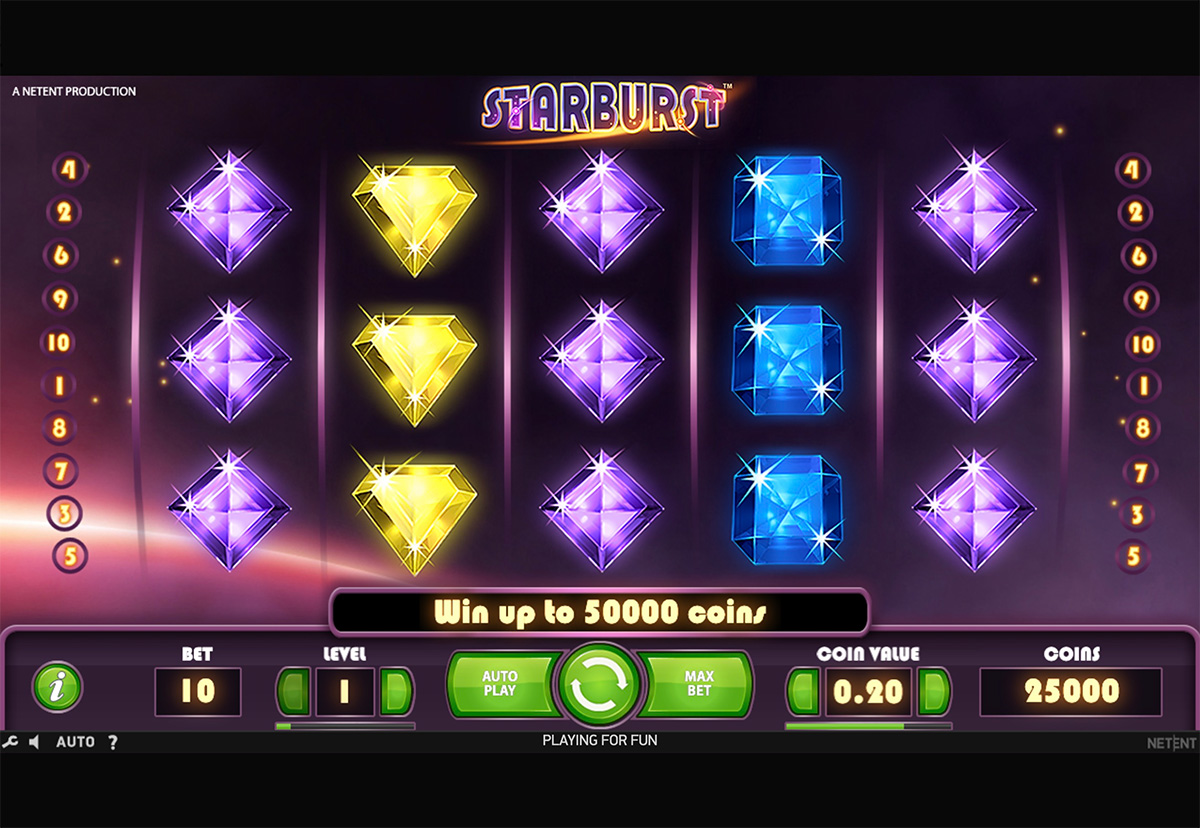 Play for real and get $5000 at Andromeda Casino Casino!

Starburst is a 5-reel 10-payline slot that brings SA players to space where stars are made of gemstones. The slot looks really gorgeous and means real business because it pays prizes both ways. Bet up to $10 per line and gain a chance to win line prizes up to x250. Explore a Starburst Wilds feature covering up to 3 entire reels and awarding re-spins. Read the rules and tips in the review below and let the beauty of stars earn you the fortune.

The game is always played at 10 lines. To start the game, select a coin value within a fairly broad range from $0.01 up to $1 (or in ZAR equivalent if the online casino allows so). Then select a bet level between 1 and 10 coins per line thus making your total bet cover between $0.10 and $100. A bet level defines your coin win because paytable values are multiplied by a bet level that you have selected. The actual size of your ZAR winnings depends on a coin value. You may skip the adjustment stage and hit the Max Bet control: it sets reels in motion at the top betting level of 10 coins, $1 each.

A Starburst Wild looks like a precious item and in fact it is quite a valuable symbol in terms of payout due to an exciting and fairly lucrative feature attached to it.

During the feature there could be up to three re-spins. This means that the third re-spin will run with reels 2, 3 and 4 being wild. In view of the “Both Ways Pay” principle it means you can earn quite a lot: nearly all non-feature icons appearing on rotating reels 1 and 5 will make combinations due to Wild reels 2, 3 and 4.

The feature is indeed fairly profitable and if you run it at a bet level 10 with the highest coin value, you may earn a huge amount, up to 50,000 coins (the actual value in ZAR depends on the coin value you have selected). At the same time the feature runs at bet settings you choose for a base game. This means that a final size of your cash prize depends on a coin value and a bet level. It is recommended to read carefully the rules of the feature, assess chances carefully and adjust your bet settings according to the epic winning potential that the Starburst Wilds feature has.

NetEnt keep up with the fashion and technological advances in the industry. This means that the game is fully up to all modern software. You may enjoy playing it on your desktop, smartphone or tablet. Take it with you wherever you go, sign in with the trusted online casino, play for real money, gain new experience and have incredible fun of making profit out of your passion.

The beautifully designed and inventively equipped 5-reel 10-payline slot offers SA players to bet up to $10 per line and win up to x250 a line bet. Its only feature, Starburst Wilds, adds a good deal of thrills and chills into the gameplay: it awards up to 3 re-spins with up to 3 Wild reels. The slot pays both ways and offers a chance to win big. The game is compatible with desktop and mobile devices.

Other slots by Net Entertainment Slots