Craps in any form is a captivating, fast and thrilling two-dice game. Though widely deemed to be a game of luck, craps leaves room for skills, that is why it is so loved by strategic people. This is a very fast-paced game that in this regard is akin to baccarat because even the first dice throw can determine the game outcome, whether win or lose. But in many cases, a round can drag on for a dozen throws, elevating the player’s emotions to the round’s closure. South African gamblers will find lots of craps offers in online casinos listed on this website. Mobile online craps is released with the same features and wagering options as traditional online craps. 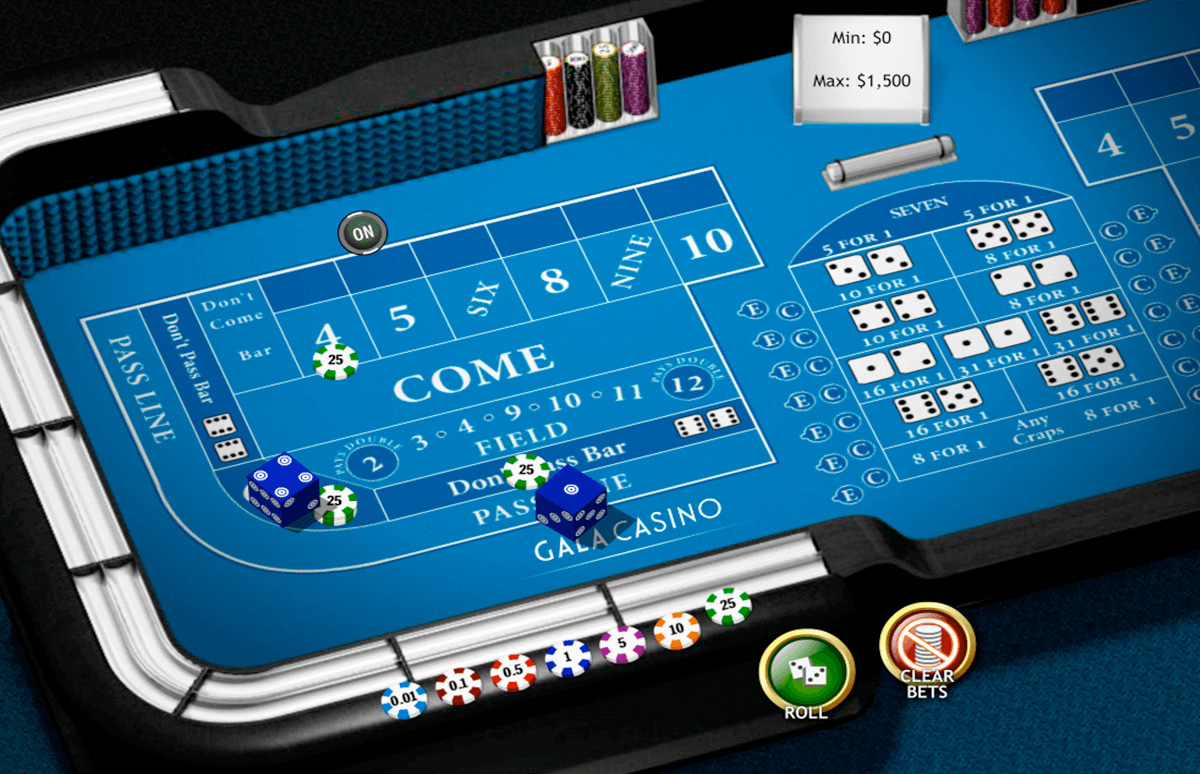 For inexperienced gamblers, a craps table may seem somewhat hectic and disorderly at first sight – there are so many markings, digits and areas on the table that it seems a challenging task to come to grips with craps. The nomenclature of the betting areas visible on the table can vary depending on the craps type because there are many side bets that do not have a universal use.

The aim of online craps is to predict the outcome of a dice throw. To do this, the player places a bet on an adequate field. Bet sizes in craps usually fit most budgets because they normally start at R1 or even less. This is in fact one of the most affordable table games in online casinos of today.

Every paid round in craps online (and mobile craps) comprises 1 or 2 stages. The 1st stage is named Come Out. It starts any game round and offers only 2 wagering possibilities: Pass or Don’t Pass. Wagering on the former, the gambler predicts that a total of the 1st dice throw will reveal seven or eleven, in which situation either stake wins instantly. Betting on Don’t Pass, the user is considered to be the winner if the total of the 1st dice throw will be two, three or twelve. If either happens, the game finishes without proceeding to stage 2.

If the SA player has wagered on Pass or Don’t Pass, and the result of the throw was four to ten (except for seven), the bet is carried over to stage 2 (Point phase). The number revealed during stage 1 becomes a “point number”. If the user wagered on Pass, the second stage continues until the point number (WIN) or 7 (LOSE) comes first. If the user wagered on Don’t Pass on the 1st stage, the second stage continues until number 7 (WIN) or the point number appears on the dice sides (LOSE).

During the 2nd phase of craps game, the user can exercise an option to play with many bets that he may find convenient. Though some of them have very high payouts, not every bet is beneficial because of a fixed house edge associated with each bet. For instance, the most profitable stake with the zero casino’s advantage are Odds and Laying the Odds. These side bets may be chosen after the come-out roll (this is when the point number was established). The Odds wins if the specific point number will reveal before 7, and similarly, the Laying the Odds wins if 7 comes before the point.

Some other stakes are shown below in ascending order of their house edges. This implies the higher a bet located in the list, the more beneficial it is for the player:

The rule of thumb in craps online is never to try Propositional bets (or props bets) – this is especially the case when playing for real money (in ZAR or other currency). Prop bets are also known as single-roll bets because they are always decided on the following roll and are never pushed when you play craps online. In one respect, prop bets have attractive payouts, e.g. the “2, 12 and all hard hop bets” boasts of paying out 33 to 1 at max, yet the house edges on these side bets are inadequately high, reaching 16.67% for Any Seven bet. So reasonable gamblers should avoid them at all.

Hard Ways is another bet series with stingy house advantage. Any hard outcome consists of a total even number made of two even numbers. For example, Hard 4 bet wins if the roll results in 2 and 2 on two dice. There are four Hard Bets on 2, 4, 6 and 8, and the top payout is 9 to 1 for Hard 6 and 8. At the same time, the maximum house edge on Hard side bets is 2.78% – a bad choice for every player.

The optimal craps strategy needs to take into account all possible odds and bar high-risk bet types from the betting profile. By doing this, the best strategy that minimizes the house edge is to stick to Pass/Don’t Pass and always put chips on the Odds. However, some craps games impose restrictions on the Odds, forbidding users to exceed certain bet amounts injected into the Odds betting area.

After the point number is established, it is also possible to wager on Come or Don’t Come that are essentially the same bets as above. All side bets feature unacceptable house edges for an intelligent user, yet some like them at times, just to mix up the gameplay and do something different.