Baccarat is a relatively young title as compared to roulette or blackjack. Though the game goes back to Italy, the principal areas of its distribution are in Asia, where baccarat is literally adored by everyone. Very fast and calm, deceitfully difficult and soothing at the same time, baccarat has become extremely popular in casinos, especially after it was featured in a top-grossing James Bond film. Online baccarat is a popular choice for many SA gamblers, who can choose a preferred baccarat variant and play for real money. Baccarat is a very fast game. Because the player cannot control the course of the game, except for only betting – each paid round lasts mere seconds. 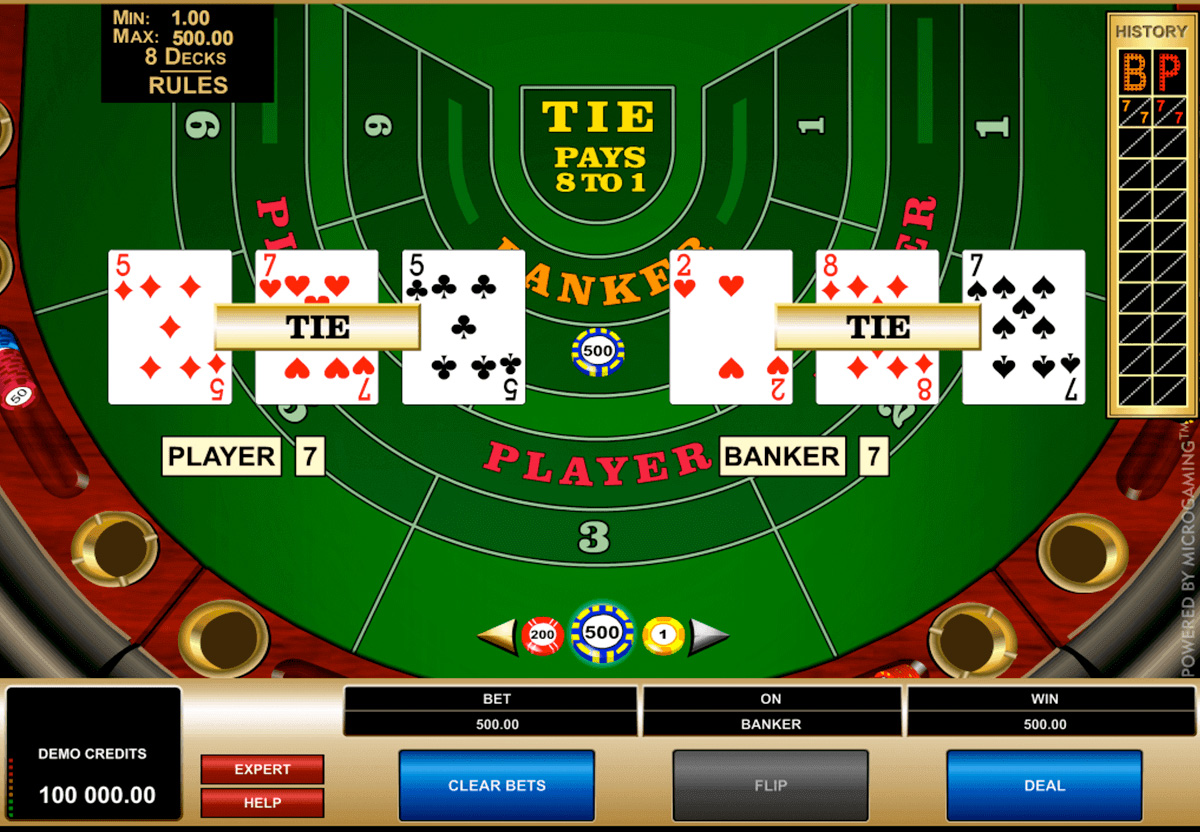 In baccarat, a user plays against the computer that deals cards onto 2 bet areas – Banker and Player. Pay attention that Player is a mere Stake name. Betting on Player does not imply that a user puts a stake in his favor or the like. To avoid ambiguity, an SA online casino player will be called a user within the framework of this article.

When entering online baccarat, a user will see a bean-shaped table with a few markings that denote betting areas where you will place your casino chips and where the cards are put by the game software at the beginning of each paid round.

A user’s aim is to predict which bet is going to win and wager on that expected result. To clarify the point, three acceptable bet options exist in each game variant: Player, Banker and Tie. In case Player wins after a paid round and the user has wagered on Player, he receives a cash prize. Similarly, if Banker wins and the user has placed a stake on that area, he gets a prize pursuant to the applicable set of rules.

Before any round gets underway, a user is invited to choose a type of stake: Player, Banker and Tie. In case the bet placed by the user wins, Player awards even money (one to one), Banker awards the same (but a 5% commission is taken from the amount won) and Tie pays out 8 to 1. In some game variations, a Tie awards nine to one (in some variations, Tie has a less beneficial payout of eight to one). To summarize, both above-mentioned stakes have the same winning odds and payouts yet Banker is accompanied with a five-percent deduction on winning.

When the bet is placed, the dealer (computer) deals two upcards to the Player and Banker each. The totals of both are counted and this leads to two possible outcomes: 1) either Player or Banker wins; 2) the dealer handles one more card to the Player and Dealer. It bears reminding that a user does not make any decisions. The decision on whether to hand out the third card or not is based on a fixed set of rules.

Each card in online baccarat has a certain value. Face cards such as J, Q and K, and also tens of any suit give zero points. Numeric cards from two to nine score according to their nominal face values, and Aces give 1 point. If a hand total consists of two digits (for instance, a five plus a six card give initially 11 points), the digit to the left is deleted and the final score is determined. In the above example, having a five and a six results in a total score of 1.

After handling the original 2 cards to Player and Banker, the dealer (computer) sometimes gives away the 3rd card on each betting area. This is entirely governed by what is generally referred to as a third-card rule which exists in all baccarat variations. The rule determines conditions of when the 3rd card is required to be handled.

In a nutshell, if the Player has eight or nine in total initial cards, no 3rd card is handed out. If either hand has eight or nine, the bout finishes and the top-valued hand is announced the winner. The 3rd card is handed out if the Player’s cards equal to two through seven. A card is first given to Player, then to Banker. After that, the hands are calculated and the winner is determined. Note that three cards is the max amount that each hand can consist of.

Since no decisions are made by the user when playing baccarat online, there are no strategies that a gambler can utilize to good advantage. The winning odds built into each game cannot be affected or maximized by the user because the only action that can be taken is selecting a bet size and a hand on which to wager. So it would be totally incorrect to speak of a valid strategy that would be applicable to online baccarat. Players just enjoy fun, quickness and emotions that emerge when playing baccarat online for real money.

Baccarat online with side bets

Among a variety of table games, online baccarat stands out for numerous side stakes that are offered by some baccarat providers. Player, Banker and Tie are the main, major bets, which are present in every baccarat game. To increase user’s involvement and add diversity, baccarat can be fitted with a few optional side stakes. The user is not obliged to bet on all of them – this is an optional step that can be skipped. But a side bet may be placed only as a complement to the main bet, not independently of the latter. The mainstream side bets include:

Enjoy thrills and spills playing online baccarat for real money
Almost every online casino listed here has a few baccarat tables in the lobby. A registered user has full access to all baccarat titles and can place real-money bets (in ZAR or bitcoin) on any device including mobile. Pick the most attractive table, feel inspired by James Bond’s favorite card game and win big.