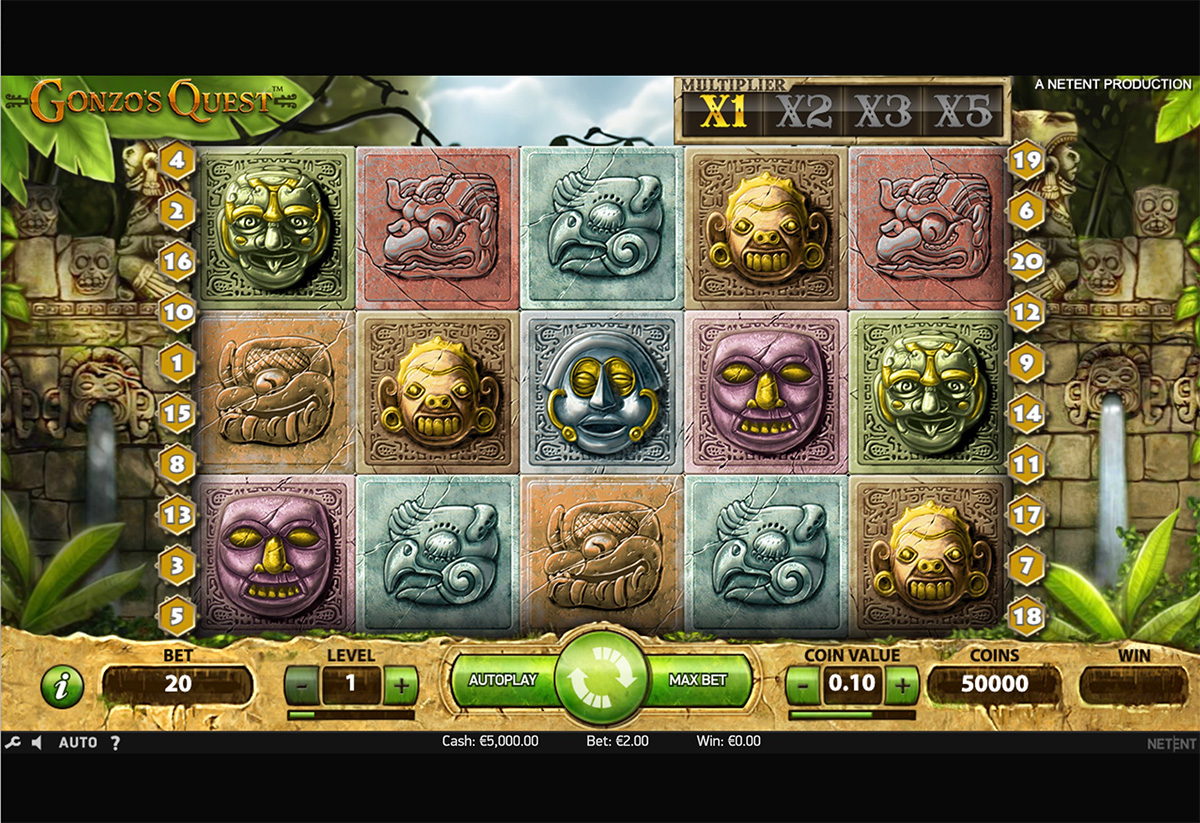 Play for real and get $625 at Lucky Creek Casino!

Gonzo’s Quest is an iconic 5-reel slot which is released by NetEnt and is themed around Aztec treasures. SA players may bet up to 100 coins of the total value up to €50 per spin and pursue a chance to hit line wins up to 2,500 coins or even up to 7,500 coins due to an Avalanche Multipliers feature. A Free Fall feature awards 10 retriggerable free games with a multiplier progressing up to x15. Find the rules and tips in the review below.

Join senior Gonzo, a brave conquistador wearing a funny helmet, in his treasure hunt and win a fortune. Gonzo has a map where all Aztec’s crypts are shown; follow him and eventually he will find the way to treasures of the lost civilization. By the way it is an easy and enjoyable business. To start the hunt, select a coin value between €0.01 and €0.50 and choose your betting level: 20, 40, 60, 80 or 100 coins, so up to €50 per spin. The game is always played on 20 lines: you do not have to activate lines and will not miss the slightest opportunity. Hit the Spin control and let Aztec symbols tell your luck.

There are 7 non-feature icons, a Wild symbol and a Scatter. Non-feature icons are ancient Aztec items carved in stone cubes. Admire the design of the reels and the way of spinning: when you hit Spin, cubes go underground and new cubes appear from above with a life-like sound. Non-feature icons pay from left to right when you land 3, 4 or 5 icons of a kind on any payline. The payouts range from 3 up to 2,500 coins, the actual value of which in money terms depends on a value of coins that you select. If you manage multiple line wins within a spin, all lines pay. A Wild symbol substitutes for any icon but it does not pay anything for itself. A Scatter does not pay either yet it triggers a Free Fall feature, read below.

The gameplay is equipped with a highly lucrative and exciting feature. Each win triggers an avalanche of symbols which is a free re-spin in essence. All winning symbols blast and disappear in dust and smoke. The remaining symbols above the disappeared icons fall into emptied places and their places are taken by new random icons falling from above. If there is a win again, an avalanche goes on and on until there is no win; then the game resumes its normal course. Each round of avalanching triggers an Avalanche Multipliers feature. It activates at the 1st avalanche at x1 level, then at the 2nd avalanche it develops up to x2 level and so on, with each next avalanche it gains 1 point, up to x5. Therefore the avalanching of stone cubes may well end up in a cash avalanche of up to 7,500 coins.

A Free Fall feature is triggered by 3 Scatters landed on any payline; beyond paylines Scatters do not work in this game. The feature awards 10 retriggerable free games. During free games an Avalanche Multipliers feature is active as well so each free spin may turn into cascading free re-spins with progressive multipliers. During free spins Avalanche Multipliers have much higher values: they start at x3 at the initial avalanche and progress up to x15 at the 4th avalanche and stay at the level of x15 during all successive avalanches. Thus you may score up to 37,500 coins during a Free Fall feature; play the game for real money and turn these coins into cash.

A Free Fall feature runs at bet settings you select for a base game. You cannot change a coin value or a bet level when the feature activates. It is advisable to place a bet wisely and during a base game select the highest betting level which you can afford.

These two features add some tantalizing quality to the gameplay: while at first sight it looks a bit slow, soon avalanching of stone cubes will catch your attention. When Avalanche Multipliers start generating pays, you find it difficult to unglue your eyes from the screen.

Gonzo’s Quest is a mobile slot

Despite featuring artefacts of the long gone civilization, the slot is a modern game that employs all cutting edge technologies and is adapted to a broad range of digital devices including desktops, smart TVs, tablets and smartphones. In the comfort of your home or on the move, sign up with an online casino featuring NetEnt slots and Gonzo will surely make you a good company.

This 5-reel video slot, which is always played on 20 paylines, takes SA players to Central America where they can hunt for Aztecs’ treasures and bet up to 100 coins, up to €50 per spin, and score line wins up to 2,500 coins. Each win triggers a free re-spin with a progressive multiplier up to x5. A bonus feature awards 10 retriggerable free games with a free re-spin feature and progressive multipliers reaching a x15 level. The slot is fully compatible with mobile.

Other slots by Net Entertainment Slots