Age of the Gods SLOT 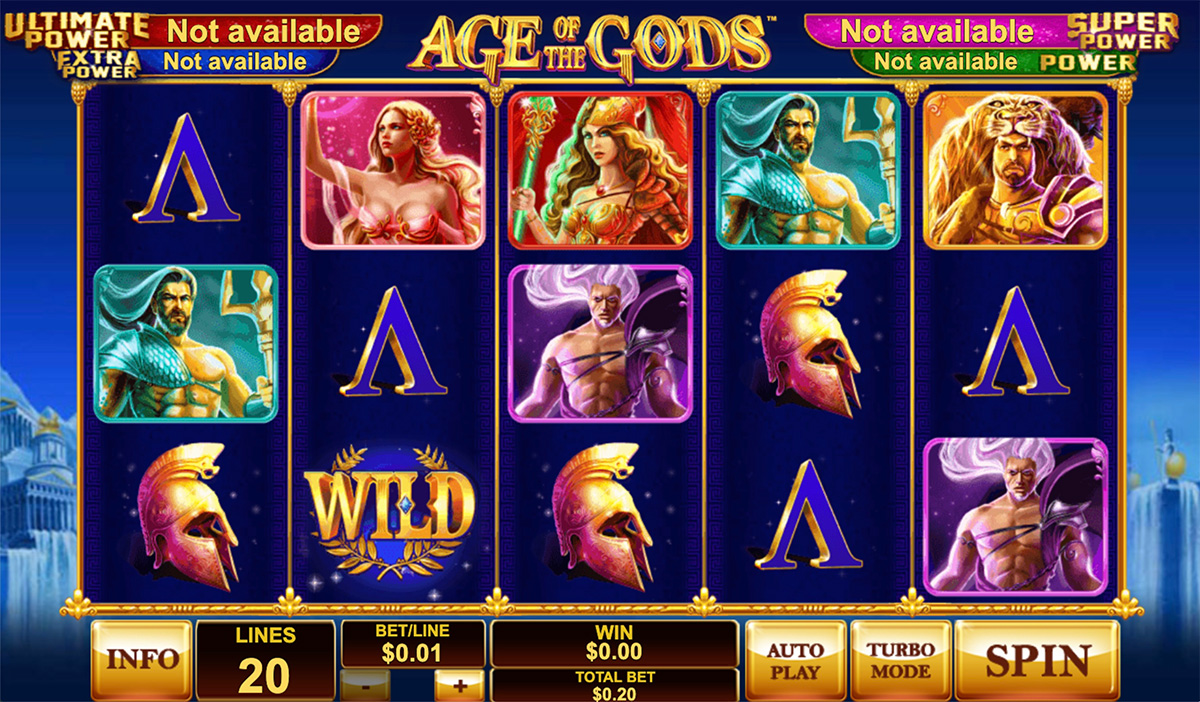 Age of the Gods slot Review

An exciting travel to the Age of the Gods is made possible due to this 5-reel 20-payline slot. Bet up to $2 per line and get a chance to score line wins up to x1,000 a line bet, Scatter prizes up to x 100 a total bet, Wild wins up to x10,000 a line bet and a special prize of x200 a total bet. The slot randomly triggers 4 Mystery Progressive Jackpots with a guaranteed win. Read the rules and tips in the review below and enter the Age of the Gods.

The game is always played on 20 lines. Place your line bet within a range from $0.01 up to $2 and start an amazing journey towards the Pantheon of the Gods where 4 Mystery Jackpots are waiting for the luckiest SA player. The possibility to bet in ZAR depends on the rules of an online casino you sign up with.

There are ten non-feature icons, a Wild symbol and a Scatter. Non-feature icons include 3 playing cards from Q through to A, a Helmet, Aphrodite, Hephaestus, Heracles, Poseidon, Zeus and Athena. Non-feature icons pay between x12 and x1,000 a line bet when you land 3, 4 or 5 matching icons on any payline from left to right. Multiple line wins are added.

This is the case when non-matching icons join forces and produce a result comparable to that of matching icons. When all 4 gods and Heracles appear in any order on any active line, they award you x200 a line bet.

Age of the Gods bonus feature

Landing three or more Scatters on reels triggers a feature combining 4 games of which you may win 1 at a time. The feature displays 20 golden coins, each hiding Athena, Heracles, Poseidon, Zeus or Hades. If you pick Hades, the feature is over and a normal games resumes. All others award free games with an extra gift. To trigger any god’s free games, you have to reveal 3 icons of a respective god. Scatters appearing on reels during free games do not retrigger the feature.

There is a good reason to sign up with an online casino and play the slot for real money, actually, 4 good reasons. These are 4 progressive Jackpot prizes including Power, Extra Power, Super Power and Ultimate Power. These prizes are linked to many games of the Age of the Gods family; thus these are progressive jackpots growing from seed values by united efforts of players who play games worldwide. The seed values of Jackpots are as follows: Power starts from €50, Extra Power – from €500, Super Power from €5,000 and Ultimate Power from a stunning €100,000 (or in ZAR equivalent) Seed values are further augmented by a progressive component.

A Jackpot game triggers at random. The chance of its occurrence depends on a bet size: the higher the bet the higher the probability. A win is guaranteed. You are offered a 4×5 grid of golden coins hiding symbols of 4 Jackpots. Reveal 3 identical symbols within 30 seconds and win. If you fail, the game will do it for you and award you a respective Jackpot. It is paid as an extra to all wins in a triggering spin.

Age of the Gods is a mobile slot

The slot is compatible with desktops, tablets and smartphones and may be played in any modern browser indoors or outdoors. Any location in South Africa covered with a wireless connection will do.

Bottom line on Age of the Gods

This 5-reel 20-payline mobile-friendly slot accepts bets up to $2 and awards line wins up to x1,000 a line bet, Scatter prizes up to x 100 a total bet and Wild wins up to x10,000 a line bet. A bonus feature awards x200 a total bet. Scatters grant 9 retriggerable free spins with multipliers, extra Scatters or Wilds. A Jackpot feature triggers randomly and guarantees one of four progressive jackpots.

Other slots by Playtech Slots