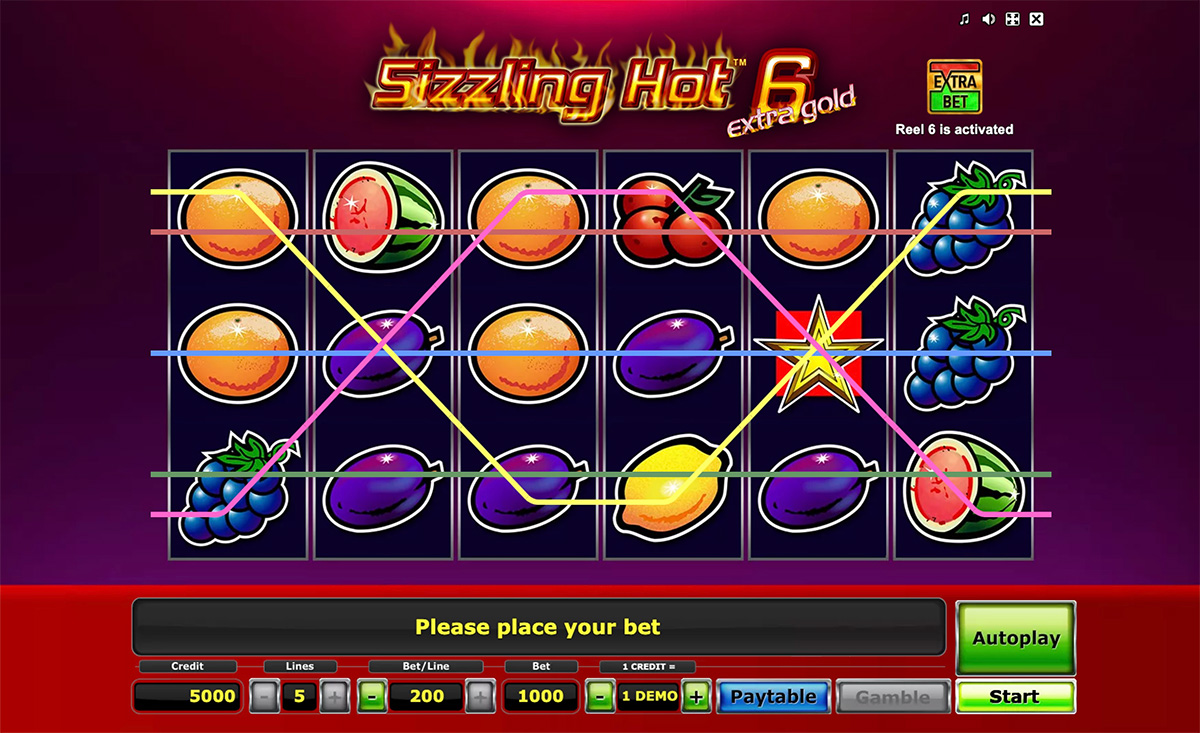 The game reviewed below is kind of bonus release from Novomatic. It is based on the all-time popular slot known as Sizzling Hot yet the new game has a brilliant addition: the sixth reel that opens up a plethora of winning opportunities. Instead of playing on five reels, you can now enjoy more chances of hitting a combination. Besides, Sevens always pay out on adjacent reels, no matter their position. Sizzling Hot 6 Extra Gold is a classic game yet it will catch the fancy of many South African gamblers who like video slots with an interesting twist.

With simple yet colorful design, the slot has only five active paylines but this is more than adequate to provide fairly generous wins. All symbols on the reels are taken from classic fruit machines and include cherries, oranges, grapes, lemons, plums, watermelons, golden stars and orange sevens.

The most exciting thing about the game is an optional sixth reel that can be activated for a price. Having 6 reels in play adds fun and increases the chances to hit a non-progressive jackpot of $375,000 if getting six 7s along an active line.

Actually, the slot accepts one coin per line and a coin denomination is adjusted in a broad range between $0.01 and $10. That said, the total bet can be between $0.05 and $50. If you play in ZAR, the specified amounts will be different. Placing an extra bet switch on reel 6 and makes it possible to create six-of-a-kind wins. Fruits and other symbols can sometimes appear in groups of two or three, thus covering a reel completely or partially, and this further contributes to winning combinations.

Sevens are the most sought-after pictures in the game for two reasons: first, they pay out up to 15,000 coins and, second, they are able to produce a win in an unusual way. Other symbols pay strictly from left to right (and in reverse direction) and the combo must begin from reel 1 or 6. Sevens differ in that they pay on adjacent positions and the starting point for a combination is ignored. This means a combo can start at reel 2 or 3 and still pay out according to the paytable.

The game is equipped with a standard gambler feature that activates after a winning real-money spin. However big or small the win is, you can gamble that amount and try to double the initial prize you have won. In the gamble feature, you are to predict the color (red or black) of the facedown card. The proper guess will double the win. In case you fail to predict it correctly, the base win will be forfeited and you return to base game.

Players who want to visit their favorite online casino and play the video slot can do this on a desktop or mobile device. The game looks matchless on small screens of smartphones or tablets. The graphics is OK and the UI is user-friendly. All you need is to get registered at the recommended casino to get access to the real-money mode.

This is a classic slot with 6 reels and 5 paylines. By placing an extra bet, the player unlocks the slot’s full potential and can win up to $375,000. Winning combos count in both directions when the sixth reel is active. The game is also playable on mobile devices.

Other slots by Novomatic Slots